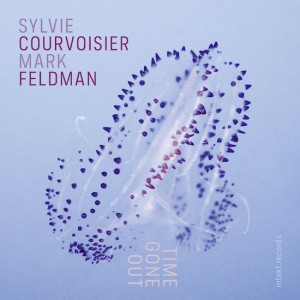 On the face of it, a piano and violin duo seems less like a jazz project than something from the classical realm, and if you’re listening for the traditional tropes of mainstream jazz—blue notes, swung eighths, regularly recurring chord changes—you won’t find them here. If, on the other hand, what you listen for is creative improvisation that marries a strong compositional sense with a high level of virtuosity, you can’t go wrong with Sylvie Courvoisier and Mark Feldman’s duo album, Time Gone Out.

It opens with “Homesick For Another World,” an eerily beautiful performance that finds the two evoking that “other world” through ghostly violin harmonics and strummed piano strings, before fading into a pregnant silence. And yet, there’s such a tunefulness to Feldman’s playing that the piece never feels off-putting. “Limits Of The Useful,” on the other hand, feels more purposely abstract, as the two focus more on texture than tune, particularly in Courvoisier’s use of prepared piano through the first half. Here again, though, there’s such a playfulness to what they’re doing that it’s easy to be drawn into the music.

By far, though, the album’s best moments come when the music’s scale turns epic. At nearly 20 minutes, the episodic title tune ranges from fevered improvisation to exchanges that could pass for excerpts from some lost piece by Olivier Messiaen. The level of communication between these two (who, in addition to being longtime duet partners, are also spouses) not only facilitates these stylistic pivots, but also leaves room for the occasional gag, as on “Not A Song, Other Songs” where at one point a long glissando from Feldman is answered by Courvoisier pounding a deep, thunderous chord—boom! You can almost hear the two of them smiling as they move on to the next exchange.