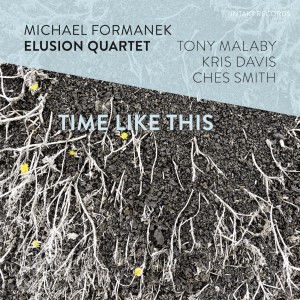 That music reflects the present—public events and private responses alike—is a jazz truism, and Time Like This by Michael Formanek’s Elusion Quartet exemplifies the dark, existential fears now rising in so many quarters. Saxophonist Tony Malaby, pianist Kris Davis and drummer Ches Smith join the widely experienced bassist in vivid expressions of sorrow, concern, fulmination, collaboration and resistance. These feelings, just hinted at by song titles, come through clearly. We hear what this company means.

There’s little conventional prettiness here, but an overarching aura of weird beauty. Malaby spills out grainy, vocal-like saxophone lines, Coltranesque in reach and grandeur, yet also starkly restrained. Davis doesn’t swing, yet her ideas and execution sustain propulsion and deepen moods. On vibes, Smith matches her, sometimes with perking glints of joy; on the Hatian tanbou and traps, he strikes against conformist beats. Formanek deploys numerous strategies on his instrument, commanding flux and flow, most in the fore on “The Soul Goodbye.”

Indeed, exploration is the binding principle here. Free improvisations—as in fearless, not random—are launched from or coexist with preordained structures, without hyping the difference between written and spontaneous parts. The band’s organic cohesion in its debut is remarkable, all four players contributing to and taking advantage of their group’s intimate and orchestral nature. Each performer remains empowered, and all together assert sympatico union. Way to be in time like this.

Time Like This: Down 8 Up 5; Culture Of None; A Fine Mess; This May Get Ugly; The Soul Goodbye; That Was Then; The New Normal. (58:43)
Personnel: Michael Formanek, bass; Tony Malaby, tenor, soprano saxophone; Kris Davis, piano; Ches Smith, drums, vibraphone, Haitian tanbou.