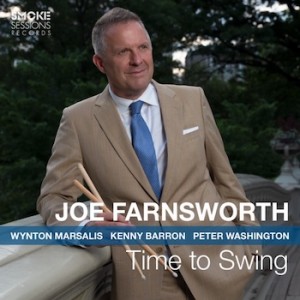 Joe Farnsworth’s drumming is the epitome of solid, swinging time-keeping, played with a light touch while maintaining a powerful groove. He’s got chops to spare, but seems uninterested in offering bravura flourishes; his big solo here, the six-minute “One For Jimmy Cobb,” is more concerned with musical narrative than technical flash. Moreover, his command of mainstream style is so complete that it hardly matters whether the tune is a churchy stomp like “Down By The Riverside” or a classic ballad like “The Star-Crossed Lovers,” because the music always has the feel-good pulse listeners expect from straightahead jazz.

For his latest album as a leader, Farnsworth has put together something of an all-star quartet. Where much of his discography found him playing with the late Harold Mabern, this session puts Kenny Barron at the piano bench, whose authoritative touch brings a suitably quirky feel to the phrasing of “Monk’s Dream” and provides plenty of drive to his own “Lemuria.” Wynton Marsalis, who’s used Farnsworth on several of his own albums, turns up on four tracks, his burnished tone and vocalized half-valve work bringing soul and wit to “Darn That Dream,” while his muted horn burns white-hot on “Hesitation,” driven by Farnsworth’s classic, bop-schooled cymbal work. As for Peter Washington, his triplet-spiked bass lines and rich, dark tone perfectly complement Farnsworth’s playing, matching it in both understated virtuosity and irresistible groove.