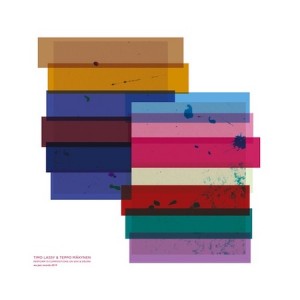 The word “fallow” can conjure images of dust and ruin—of atrophy. However, the process of leaving fields fallow acts as a means of restoration and renewal. In the hands of Finnish jazz duo Timo Lassy & Teppo Mäkynen, “Fallow,” the first song on their self-titled album, keenly represents potential as it introduces the listener to the eclectic blossoms of musical ideas at work across the 13-song record.

Lassy and Mäkynen’s saxophone-percussion duo could come off sounding hollow with no harmonic accompaniment, but the two make simple sound simply divine. The tracks—most clocking in around three minutes—are complete ideas, boiling down extended jazz solo forms into enthralling, engaging tone poems that move from modal to free and touch on electronics. Lassy, an active bandleader in Finland, blows deep from the diaphragm, and on tracks like “Kobi” and the two parts of “Liberty,” he sounds like he’s trying to canvas the entire ear with the forceful, broad sound that explodes from the bell of his horn. Mäkynen, whether laying down a club-worthy backbeat on “Dark Cyan” or pushing a more tom-driven attack for “Goldenrod,” doesn’t crowd or compete with Lassy and never acts simply as timekeeper. The two are equal voices, weaving improvisations and licks together as a collective. “Liberty (Part 2)” exemplifies this vision of equality: As the pair launch into early-Impulse! Coltrane aerobics, they constantly push against each other, propelling the other forward by friction, neither letting up until they drop their instruments in finality and contentment.