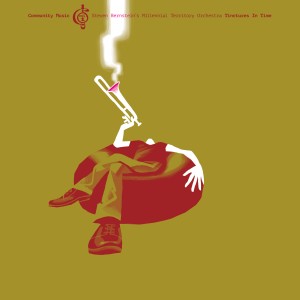 Since its debut in 2006, Steven Bernstein’s Millennial Territory Orchestra has largely been a showcase for its leader’s arrangements. Sure, the band has its share of standout soloists, but the draw has been Bernstein’s ability to recast other people’s material, be it Don Redman or Sly Stone or Prince.

Tinctures In Time, though, is all Bernstein, with most of the material written in 2019 as he dealt with death and illness among friends and family. Bernstein relies on the transcendent power of groove to tap into energies that are transcendently uplifting.

His charts are often genuinely minimalist, building off short, interlocking phrases to establish rhythmic cross-currents in the manner of Steve Reich or Phillip Glass. In “The Gift,” repeating motifs of two to six notes bubble and churn, providing a secondary pulse over Ben Perowsky’s second line snare, while “Show Me Your Myth” takes an additive approach, layering propulsive snippets of brass and reeds into a relentless, slow-building groove. Where “Angels Too” showcases a single soloist, others tunes, such as the rambunctious “Satori Slapdown,” offer a series of solo spots.

In the end, Bernstein’s MTO is less a writer’s band than a composer-organized community. It may look like a big band, but it feels like a combo.