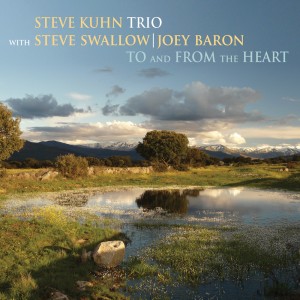 To And From The Heart has no concept, no gimmick, no contrived “story peg” to speak of. It’s just a solid date from ever-reliable octogenarian pianist Steve Kuhn and his equally reliable troupe, bassist Steve Swallow and drummer Joey Baron. The longtime group isn’t interested in reinventing the wheel or even in terrifically advancing its revolution, at least not on this record. The members simply show their sharp chemistry and careful attention to detail.

Anthony Newley’s “Pure Imagination” shows how the trio can imbue a song’s inherent whimsy with fresh joy, thanks to Baron’s impeccable swing and a wide-eyed solo from Swallow. Kuhn touches the bassist’s poignant “Away” with a sliver of sunshine, Baron underscoring it with an added kick in his brushstrokes. Another Swallow original, “Thinking Out Loud,” has a certain cocky strut to it that Kuhn (correctly) entrusts to his bandmates, while he muses through the Gershwin-like tune and segues so easily into his solo that it might take a quick rewind to find the turning point. He takes a second one, but that’s easy to spot; it follows a quickie from Swallow.

Indeed, if To And From The Heart revels in schtick, it might be the bassist’s prominence. He plays electric, ensuring that his sound never is lost or subliminal, but is as clear and robust a rhythmic presence as Baron. He’s also an active player, one to mark every passing chord (even on ballads, like the tender “Never Let Me Go,” where he shares his accents with Kuhn’s left hand and comes as close to subtle as he gets on this album). But Swallow’s no more essential here than the superlative Kuhn and Baron. The record simply confirms what we already know, and does so with considerable charm.

To And From The Heart: Thinking Out Loud; Pure Imagination; Away; Never Let Me Go; Into The New World; Trance/Oceans In The Sky. (46:40)
Personnel: Steve Kuhn, piano; Steve Swallow, bass; Joey Baron, drums.