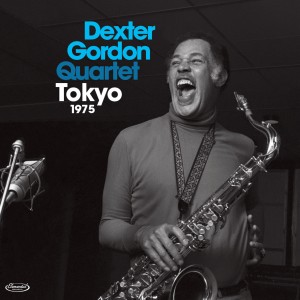 This previously unreleased live recording captures Dexter Gordon (1923–1990) in concert with perhaps his finest, and most consistent, rhythm section.

Pianist Kenny Drew, bassist Niels-Henning Ørsted Pedersen and drummer Albert “Tootie” Heath—the house band at Jazzhus in Copenhagen, where Gordon lived and played regularly for 14 years during the 1960s and ’70s—joined the towering tenor saxophonist for this performance at Tokyo’s Yubin Chokin Hall on Oct. 1, 1975. The well-seasoned group gets right down to business, kicking off the set with “Fried Bananas,” a signature Gordon original that was first recorded on his 1969 album More Power! The rest of the set includes two standards—“Days Of Wine And Roses” and “Misty”—plus the show closer, Billy Eckstine’s innuendo-rich “Jelly, Jelly,” the lyric of which Gordon sings, to the audience’s delight.

The tunes all run nice and long, thanks to a plenitude of meaty, extended improvisations from all onboard. Gordon is in top form, quote-happy as ever, peppering his swaggering hard-bop solos with well-placed bits of humor, huge dollops of blues and forever-clever turns of phrase. Pedersen’s breathtaking solo on “Days Of Wine And Roses” is a highlight, as is Drew’s flourishing ride on “Misty.” Bonus tracks on the album include a live 1973 performance of Thelonious Monk’s “Rhythm-A-Ning,” recorded in Holland with Norwegian Espen Rud on drums, and a live version of the standard “Old Folks” from a 1977 concert in New Haven, Connecticut, with Gordon’s “homecoming” band of pianist Ronnie Mathews, bassist Stafford James and drummer Louis Hayes. The sound quality of these live recordings can be spotty at times, but the brilliant content of the performances makes the entire album—available on CD and vinyl—a surprise treat for Gordon fans.