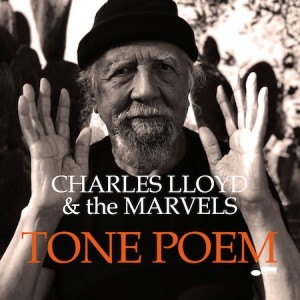 The name “Charles Lloyd & The Marvels” has the ring of early rock ’n’ roll, an association amplified by the quintet’s instrumentation and taste in tunes. (The band’s first album opened with a cover of Bob Dylan’s “Masters Of War.”) The only thing missing on its third album is a singer, though guest vocalists featured on the group’s previous efforts.

Tone Poem not only dispenses with vocals but, apart from a hymn-like rendering of Leonard Cohen’s “Anthem,” most of the rock trappings. Instead of covering Dylan or Hendrix, this album goes for Monk and Ornette, albeit in a strongly pop-
inflected style. Coleman’s “Ramblin’,” for instance, is more blues-rock than free-jazz, pushed along by Eric Harland’s second-line pulse, and framed by both the feedback-spiced jab of Bill Frisell’s guitar and the freight-train whine of Greg Leisz’s pedal steel.

On the other hand, Gabor Szabo’s “Lady Gabor” rides the same throbbing bass line that powered the tune when Lloyd and the guitarist recorded it as part of Chico Hamilton’s Quintet in 1963. So, it’s not as if the bandleader’s radically changing gears. Instead, the version here merely adds a high-gloss finish to the groove, making the sound prettier without diminishing the rhythmic drive or improvisational edge.

Prettiness is an undervalued quality in jazz, and Lloyd has no qualms about exploiting it. “Dismal Swamp,” which despite its title is a cheerful little boogaloo, uses an alluring flute line to spark some ferociously inventive playing by Frisell and Leisz. Given the general gloom of the past year or so, maybe it’s time to give prettiness a chance.