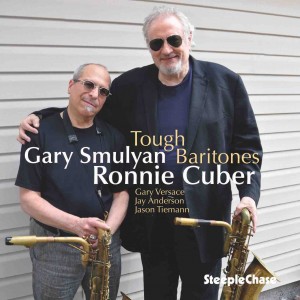 Two of the jazz world’s leading baritone saxophonists, Ronnie Cuber and Gary Smulyan, meet here for the first time to tear it up together—bebop-style—on the “big pipe.” Cuber, 79, and Smulyan, 64, are among the more accomplished soloists on bari, an instrument celebrated for its tonal beauty but notorious for its unwieldy heft. They play gorgeous-sounding vintage horns: That’s Cuber on his low-A Selmer in the left channel, and Smulyan on his low-B-flat Conn mixed to the right. And they let nothing get in their way during this animated April 2019 blowing session. These baritone masters make a sport of navigating the fast-moving changes, zigzagging lines and skippy syncopations that define the genre. With the ace support of pianist Gary Versace, bassist Jay Anderson and drummer Jason Tiemann, they rip their way through eight bebop/hard-bop covers and two Cuber originals on this joyfully greasy blowing summit. They come out of the gate strong on the opening tune, Horace Silver’s uptempo swinger “Blowing The Blues Away,” with Versace getting in on the improv action after solos by each baritonist. Swing ends up being the thing on Red Prysock’s “That’s The Groovy Thing,” the saxes laying down bare-bones blues figures in greasy octave-unison; Versace lays way back in a manner that shows that he gets it, too. Silver’s “Nica’s Dream” is a more sophisticated arrangement, the two saxophonists dovetailing and harmonizing on the head before jumping boldly into their solos. Dig how Tiemann uses syncopated rim-sticking and stand-clicking to drastically change texture during Versace’s solo. Cuber is under-miked at the top of Richard Rogers’ “Lover” but comes roaring into his solo like a hurricane; meanwhile Smulyan improvises through long sequences of clearly stated ideas and Versace really turns up the speed; then the saxes trade eights with Tiemann, setting him up for his own tasty solo spot. Versace introduces Thelonious Monk’s “Well You Needn’t” in a perfectly quirky manner before the harmonized saxophones take charge and state the theme. Silver’s “The Preacher” is a medium-up swinger that bestows a down-home blessing on the listener. Tough Baritones buzzes with one-take excitement. The guys simply go for it, indulging their affinity for classic Pepper Adams-style bari sax bebop.