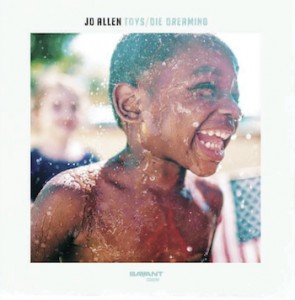 By mashing up the names of two individualistic tunes, tenorist JD Allen arrived at the title of his new album, Toys/Die Dreaming. The first, “Toys,” smolders as a freely melodic rumination, with Allen feeling out impressionistic lines alongside bassist Ian Kenselaar and drummer Nic Cacioppo. The second, “Die Dreaming,” pulsates with rhythmic insistence. So, what’s he getting at with the title? The vexing question leads to interesting observations about the bandleader’s creative use of harmonic understatement and melodic assertion. Both tracks, different as they are, exemplify the advanced form of musical play that Allen expresses so confidently through his austere compositions. Given the excitement that breaks through its serious veneer, however, it’s easy to conclude that the title implies a happy—rather than moribund—demise. Whatever the metaphoric meaning, the recording rings with intention. On “The G Thing,” he uses a dulcet rubato phrase as a launching pad for its escalating, swinging exposition. But on the album’s three covers, Allen hews closer to convention, sinking deep into a salty blues on “Red Label,” stretching into mourning on “I Should Care” and extracting the odd intervallic melody from “You’re My Thrill” with cunning precision before setting off on a thoughtful improvisation. He’s dreaming, still.