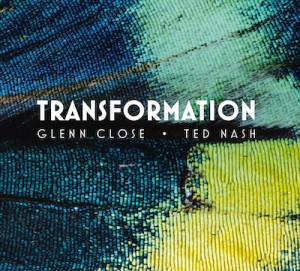 Transformation is the product of a riveting intersection of iconic musicians, poets and performance artists, and the desire of Grammy-winning reedist Ted Nash and Academy Award-nominated actress Glenn Close (the project’s co-creators) to artfully tell stories that both represent and inspire transformation.

The music, composed by Nash and performed by the Jazz at Lincoln Center Orchestra featuring Wynton Marsalis, is inspired by literary works curated and, in some cases, performed by Close around their theme of transformation. The project also features passionate performances from Wayne Brady, Amy Irving, Matthew Stevenson and Nash’s son, Eli Nash.

The first track, “Creation Part I,” starts with Brady’s commanding voice reciting the opening lines of English poet Ted Hughes’ Tales from Ovid: “Now, I am ready to tell how bodies are changed into different bodies.” Meanwhile, Nash and company emphasize the emotional content while also providing wordless space for the listener to ponder. Next, the group dives into “Dear Dad Letter,” on which Eli Nash reads aloud the emotional letter he sent to his father, in which he comes out as transgender. It’s directly followed by Ted Nash’s musical response: a passionate full-band expression of unconditional love.

The album goes on like this, featuring raw, poignant and surprising stories of evolution, shared bravely by their sources, or by sensitive, skilled interpreters.