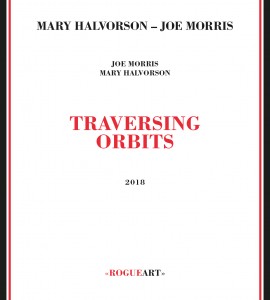 The internal logic and rhythms of Mary Halvorson’s maneuvers up and down the fretboard are instantly recognizable in just about any setting. And as she continues releasing a fecundity of music stamped with the irrepressible style, the guitarist has circled back to record with Joe Morris, her one-time instructor, nodding to the importance of the music’s historical mentoring system.

Summoning a skittering storm of slinky single-note runs on Traversing Orbits, Halvorson and Morris offer up a batch of stark duets, a chance for the pair to extol their similar styles. “Semaphore” mostly sounds like stuttering, each guitarist scraping and raking picks across their six strings, summoning any kind of noise they might find suitable within the duo context. “Full Of Somehow” follows, offering up chording—largely absent throughout the program—and coming closest to what opponents of free music might think of as jazz.

Apart from guitarist Tashi Dorji, there’s perhaps not another more suitable partner for Halvorson, as she and Morris improvise their way through music that cascades and wobbles, bounces and judders. The improvisations, though, never seem aimless, each performer displaying easy mastery of their instrument. The lone setback (or perhaps one of the recording’s most sturdy recommendations) is not being able to fully figure out who’s who at any given moment.

During a career that stretches back to the ’80s, Morris has thrummed his way through avant-garde circles. And here, he and Halvorson work to enshrine freedom for another generation of improvisors.