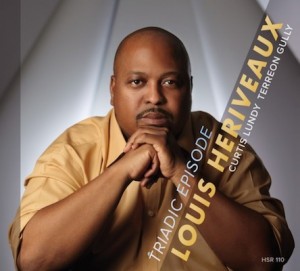 As debut records go, this one is an absolute stunner. Atlanta-based, New York-born pianist Louis Heriveaux has been piling up accolades since he performed Haydn’s Piano Concerto in D major at his first recital—age seven!

From there, Louis enrolled in various academic studies, garnering award after award. At age 19 he joined guitarist Russell Malone’s band, followed by work with vocalist Nnenna Freelon, saxophonist Jimmy Heath, drummer Ralph Peterson and saxophonist Kenny Garrett. When not playing his house gig at Houston’s Restaurant in the Buckhead neighborhood, Louis is recording with notable Atlanta-are musicians on such projects as Jazz Contrast: Tribute to Kenny Dorham.

That Louis hasn’t recorded his debut as a leader until now is rather remarkable. Triadic Episode marks the debut of one of the finest, most inspired and effortless jazz musicians to come along in ages.

Acknowledging equal debts to piano greats Mulgrew Miller and Kenny Kirkland, Heriveaux composes and performs with a sure brilliance, making every track on his debut an absolute delight. Joined by upright bass master Curtis Lundy and stimulating drummer Terreon Gully, Triadic Episode lifts off on Miller’s “From Day To Day” and soars until Gully’s closer, “Swing’n Things.”

The trio plays beautifully, casting off sparks, dancing as one. Cole Porter’s “Everything I Love” maintains the album’s spell, and Heriveaux’s light touch and spiraling solos coat every performance in a kind of glistening, magical jazz dust. Lundy and Gully are superb throughout, Gully given unusually ample solo space considering it’s the pianist’s debut. But such is the mark of many great musicians, reveling in the work of their sidemen as much as their own.

Heriveaux’s “One For Simus” is another standard in the making, the melody so familiar, the performance graceful and natural. The title track is a laid-back, slow-simmering swinger, the kind of summer blues that goes by in slow motion yet is over too soon.

It’s the same for entire album. Its joys are many, its commitment total. Heriveaux’s jazz baptism is complete.

Triadic Episode: From Day To Day; Theme For Doslyn; Everything I Love; One For Simus; Lundy’s Blues; Body And Soul; Triadic Episode; Blue Bossa; At The Crossroads; All The Things You Are; Swing'n Things. (49:00)
Personnel: Louis Heriveaux, piano; Curtis Lundy, bass; Terreon Gully, drums.