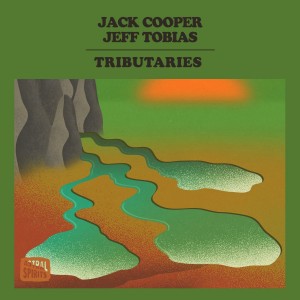 This may not be the most minimalist jazz can get, but it’s coming close. Tributaries features two side-long tracks that were created from tone-rows, or “systems,” by guitarist and composer Jack Cooper and then used as templates to improvise from. Together, Cooper and Jeff Tobias, a saxophonist and member of the group Sunwatchers, then devised methods and approaches for Tobias’ interpretation, allowing for a push-and-pull between melodic unison.

Cooper may be more well known outside of the improvisational jazz scene as the songwriter behind such bands as Ultimate Painting and Modern Nature. Tobias has been a member of Cooper’s Modern Nature since its formation in 2019. Their prior experience together is in evident here; this is complicated material that twists and turns with its own internal logic. The two flow through it effortlessly.

The result feels conversational, neither overly composed nor overly improvisational. The systems within feel as if they could go on forever in an infinite loop. Tributaries uses space and pacing to good effect throughout. Tobias plays the perfect foil to Cooper’s guitar playing, highlighting the compositions without overpowering Cooper’s guitar. Cooper describes the aim as “melodic collectivism” and Tributaries gets there.