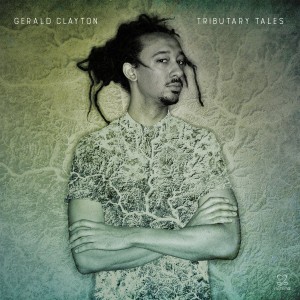 Pianist Gerald Clayton has a decidedly West Coast jazz pedigree: his father is Los Angeles bass legend John Clayton, and his uncle is reedist and educator Jeff Clayton, a California institution. Gerald long ago uprooted from his home soil—trading L.A. surf for New York skyscrapers in the mid-2000s—but his experiences on the Pacific Coast have shaped his jazz aesthetic and remain a guiding force in his growth as an artist. He reflects on those formative influences on his new album, Tributary Tales, which merges the popular music of his youth—hip-hop and r&b of the ’80s and ’90s—with his own liquid-cool brand of modern jazz. Clayton has long served as a sideman to similarly groove-minded artists, with notable stints in the ensembles of trumpeter Roy Hargrove and drummer Kendrick Scott, and his latest album draws handily from those sources. “Soul Stomp,” with its deep, comfy pocket, nods to a gospel aesthetic, while “Lovers Reverie,” which features spoken-word artists Aja Monet and Carl Hancock Rux, recalls sultry r&b, illuminating themes of love and intimacy with poignant lyrics: “You are the lips I walk through drenched in another man/Eyes as stained glass windows, your face shines in spirit,” intones Monet. Sharper, more angular corners protrude through “Squinted,” on which Gabriel Lugo adds crackling percussion and vocalist Sachal Vasandani lends haunting wordless vocals. But there are also moments of unfathomable tenderness, nowhere more prominent than on “Reflect On,” a brief solo excursion in which the pianist contrasts streaks of upper-register notes against an aching lower-register drone. As impressive as Clayton’s pianism may be, his compositions—and their ability to showcase the talents of the album’s many guest stars—deserve equal praise. Alto saxophonist Logan Richardson is a glowing presence on numerous tracks, and he’s abetted by fellow reedists Dayna Stephens and Ben Wendel on several others (bassist Joe Sanders and drummer Justin Brown round out the rhythm section). It’s a collective of great cogency and strength, a crew singularly capable of navigating the many tributaries that feed into Clayton’s vast musical vision.