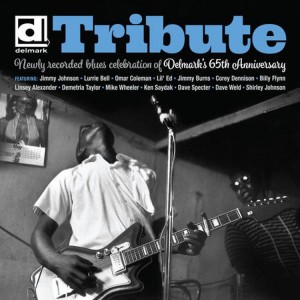 Founded by Bob Koester, Delmark released a few albums by legendary vocalist/harmonica player Junior Wells, including the monumental classic Hoodoo Man Blues (1965), as well as Southside Blues Jam (1970) and On Tap (1975). So, it is fitting that this new collection—titled Tribute: Newly Recorded Blues Celebration Of Delmark’s 65th Anniversary—opens with a fiery rendition of a tune that Wells recorded for Delmark. Singer and blues harpist Omar Coleman unleashes a sizzling version of the On Tap track “Train I Ride,” which is fueled by Willie Hayes’ locomotive drums and punctuated by Hank Ford’s tenor saxophone work.

Most of this album’s tracks are new versions of tunes that are part of the deep Delmark catalog, and the liner notes indicate which vintage artist is being saluted with each performance. Jimmy Johnson and Dave Specter interpret “Out Of Bad Luck” (a tribute to Magic Sam), Mike Wheeler does a version of “So Many Roads” (Otis Rush), Demetria Taylor sings “Riverboat” (Big Time Sarah) and Lurrie Bell tips his cap to his father, Carey Bell, with “One Day You’re Gonna Get Lucky.”

For fans around the globe, this style of muscular Chicago blues has been the soundtrack to many Saturday nights, as well as the salve that has helped them through tough times. Fortunately, it does not seem as though Delmark itself will endure tough times in the foreseeable future: Koester recently sold the label to Chicago-based musicians/educators/arts advocates Julia A. Miller and Elbio Barilari. Spinning the album Tribute is an entertaining way to explore Delmark’s rich history and the current Chicago blues scene—while Miller and Barilari ambitiously plot the label’s plans for the next decade and beyond.