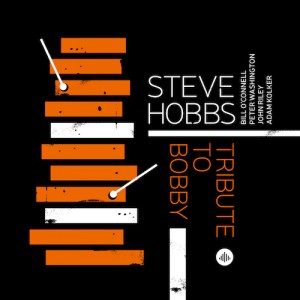 Steve Hobbs’ latest project didn’t start out as a tribute album. But it became one soon after its recording due to the Aug. 16, 2016, passing of Hobbs’ friend and mentor, the legendary vibraphonist Bobby Hutcherson. Hobbs, one of the leading jazz vibraphonists to follow in Hutcherson’s footsteps, had chosen to center the music for his quartet’s third recording project mainly around the marimba, a mallet instrument at which he’s equally adept. Hutcherson also frequently played the marimba, making a distinct jazz impression upon the instrument. With Hobbs behind the mallets on Tribute To Bobby, the marimba gets an exhilarating, rejuvenating workout. He and tenor/soprano saxophonist Adam Kolker share duties as the driving forces behind the music, swinging hard with style, nailing intricate lines and locking in tightly with pianist Bill O’Connell, bassist Peter Washington and drummer John Riley. Instances of profound eloquence and stunning chops abound: Hobbs’ whirlwind solo on “New Creation,” Riley’s Art Blakey channeling on “Into The Storm” and the propulsive bass line Washington developed for “Besame Mucho” are but a few examples of the brilliance on display in this energetic program. This is a proper tribute to Hutcherson if there ever was one, even though it wasn’t planned as such. Hobbs’ detailed liner notes are informative, entertaining, required reading.