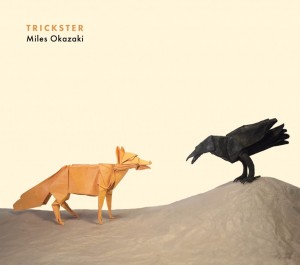 Guitarist Miles Okazaki spent the early phase of his career establishing his bona fides as an accompanist, and in due time became a premier harmonic foil for vocalists like Jane Monheit and Jen Shyu, whose records are significantly enhanced by Okazaki’s harmonic tapestries. But at some point during that early stretch, the Harvard-educated, Juilliard-trained guitarist took a turn toward experimentalism, and in pursuit of that aesthetic, he soon found himself in the prestigious company of avant innovators like Steve Coleman, Matt Mitchell and Dan Weiss. Okazaki’s latest album, Trickster, is his first leader album in five years, and his first for the Pi label. It also ranks among his bravest and most artistically ambitious recordings to date. Trickster was originally inspired by Lewis Hyde’s book Trickster Makes This World. As Okazaki describes it, “The trickster figure is an ancient archetype in human folklore. They are creative in nature, using mischief and magic to disrupt the state of things, breaking taboos and conventions, opening doorways.” There is, to that end, an undeniable sense of sleight-of-hand at play, though of a cerebral sort. Okazaki and his quartet—Craig Taborn on piano, Anthony Tidd on bass and Sean Rickman on drums—craft the kind of sonic puzzles that, while beautiful to behold, provide additional satisfaction as they are eventually deciphered. “Box In A Box,” for example, distorts the senses with its rotating tetrachords, wayward bass line and shape-shifting drum beat—yet it remains unfailingly catchy. “Black Bolt” evokes a similar sense of being off-balance, pitting a roiling bass line against Okazaki’s spasms of guitar. That’s not to say the album is all musical calculus. Several tracks approach the pulse of swing, with “Mischief Maker” and “The West” among the most radiant of that bunch. And on the solo piece “Borderland,” Okazaki even flashes some of the acoustic delicateness of his early, straightahead days. Trickster is an intellectually hefty album that feels weightless—a neat trick, and the perfect first step for listeners just beginning their ascent into the avant-garde.