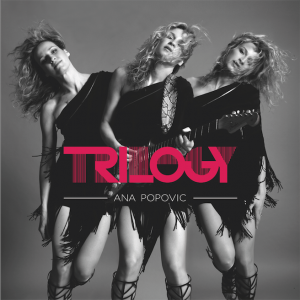 Ana Popovic is a formidable guitarist and a persuasive singer. She’s currently on the road with the Experience Hendrix tour, where she proves her mettle by matching licks with heavies like Buddy Guy and Zakk Wylde.

Like Hendrix, she has an omnivorous approach that draws equally from blues, jazz and rock. She worked for a year to assemble this ambitious triple-CD set, enlisting four producers and 30 plus musicians.

The funky “Love You Tonight” opens things up with Popovic’s sizzling vocal, a lively horn section and her own short, sharp solo. She brings a Sly and the Family Stone vibe to “Long Road Down” and a cover of Mandrill’s “Fencewalk.”

“Long Road Down” features Perkins on chattering rhythm guitar, a gospel-drenched lead vocal from Popovic and soul stirring backing vocals from Anjelika Joseph and Erica Falls. “Train” is a simmering ballad that describes a one-night stand slipping into a passionate affair, with blues star Joe Bonamassa providing a smoking outro.

“Let’s Do It Again” is a duet with Dickinson’s drums and Popovic’s guitar dancing around a bluesy hip-hop beat (Al Kapone drops a low-key rap into the mix to support Popovic’s salacious vocal). And the instrumental “Who’s Yo’ Mama?” is a blues boogie that gives Popovic opportunity to show off her considerable chops, jumping from rhythmic bass runs to showers of gritty arpeggios and sustained, bluesy bent tones.

The disc Midnight tackles jazz with the help of producer, arranger and trombone player Delfeayo Marsalis. Popovic often lays out on these tracks, letting Marsalis and pianist Kyle Roussel set the pace. “New Coat Of Paint,” a Tom Waits tune, opens with Roussel’s frisky piano and a teasing vocal from Popovic that promises an evening of carnal delights. Marsalis complements her with a muted trombone solo.

The swing tune “Waiting On You” gets two takes, one played in double time. The first time out, Roussel’s light, playful piano and Herlin Riley’s subtle percussion lay the groundwork for a good-humored vocal from Popovic, who slips into Wes Montgomery mode for a muted solo of comped chords and brief bursts of arpeggios.

The set closes with “You Don’t Know What Love Is.” Popovic puts aside the guitar to dig into the vocal, opting for a somber, melancholy delivery. She is a practical bandleader here, resisting the impulse to show off her chops for a reserved approach that allows her to get the full impact out of every note she plays. Trilogy certainly shows off her considerable talents as a vocalist, with a wide range of moods—from snarling rocker to laid-back, late-night lounge crooner.