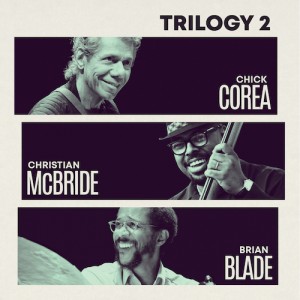 Even when exploring blues forms, his playing has an infectious lift to it, while many of his signature compositions—such as “500 Miles High” and “La Fiesta,” both of which are addressed on this live set pulled from a 2016 tour—exude joy within a contemporary jazz context.

Beyond single-word categorizations, what has characterized Corea during the past six decades is how the pianist finds his true expression in a trio setting. Despite far-ranging approaches, which have stretched from his ring-modulated Fender Rhodes freakouts in the employ of Miles Davis to oblique improvisations with Circle to electrified romps with Return To Forever, Corea has returned time and again to the trio format for his most satisfying recordings.

Among the mighty troika of late 20th-century jazz pianists—if listeners, fans, historians and critics eventually remember Keith Jarrett for his wholly improvised solo recitals and Herbie Hancock for his soulful excursions with bandmates like Wayne Shorter—Corea will have his trios. And the combination of Corea, bassist Christian McBride and drummer Brian Blade will stand among his finest. The pair are Corea’s equal in both artistic breadth and technical facility, but most of all, they can match him on the buoyancy meter.

For proof, check out Blade as he digs into “500 Miles High,” vocalizing as he executes a muscular tom-tom run. If you’ve seen Blade play, you can picture him levitating from his stool onstage. Or dig McBride’s springy solo on Steve Swallow’s “Eiderdown” and hear the way he navigates the changes so rapidly that it almost seems like he’s playing two lines at once. All the while, the accents Corea and Blade add are so precise that they seem scripted.

At an age when many jazz masters begin to downshift or are forced by the aging process to find workarounds for what used to come easily, Corea hasn’t backed away from projects like going head-to-head with his impossibly energized protégé Hiromi or showcasing 20 different bands to mark his 75th birthday a few years back. On Triology 2, those kinds of challenges are represented by Thelonious Monk’s treacherous “Work”—a composition that stands alongside John Coltrane’s “Giant Steps” as one of the most formidable mountains in the canon—and his own “Now He Sings, Now He Sobs,” a mountain of its own. Corea bounds through both, showing his mastery of dynamics and emotional release.

One might wish for a bit more variety in the program, but it’s hard to fault the inclusion of standards like “All Blues” when they become vehicles for Corea’s sweeping statements or McBride’s joyous interpretation of Paul Chambers’ iconic bass line.

All blues? All buoyant.