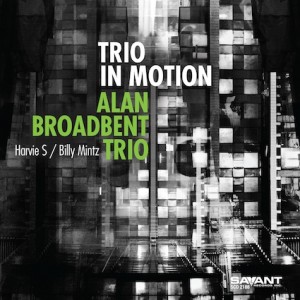 Presiding with a kind of cultured-gent authority, Alan Broadbent has been a creative force to reckon with since the 1970s. His discography is loaded with gems, including work with bassist Charlie Haden and vocalist Irene Kral, and this latest album, Trio In Motion, continues a long winning streak.

As his self-confidence and creative thought has deepened, Broadbent’s style has gained great personality, while remaining indebted to his inspirers—Bill Evans, Red Garland, Bud Powell and Lennie Tristano. Supported here by two models of consistency, bassist Harvie S and drummer Billy Mintz, the New Zealand-born pianist, who possesses a special touch with a melody, holds an equilibrium between handsomely crafted prose and assertiveness. The dozen tracks also show how unselfconscious and remarkable his sense of tempo and note placement are.

Broadbent typically avoids the stock of commonplace material; instead, he digs up less obvious historical fare. Tadd Dameron’s “Lady Bird” is elevated by the sound of pure delight in his playing, while Cole Porter’s “I Love You” and Hoagy Carmichael’s “One Morning In May” are purged of nostalgia via crisp in-the-moment emotional clarity. Tristano’s “Lennie’s Pennies” and John Coltrane’s “Like Sonny” seem indisputably fresh. So does the slow-moving “Late Lament,” from Paul Desmond, a vignette of sensitive emotional shading. Revivals of more familiar fare, like Lil Hardin’s “Struttin’ With Some Barbeque,” now Latinized, and Charlie Parker’s “Relaxin’ At Camarillo” (Bird’s his ultimate hero) are appealing, too. Telepathy among trio members appears particularly keen on their luxuriant song “Moonstones.”

Trio In Motion: Wonder Why; I Hear You; Lennie’s Pennies; Struttin’ With Some Barbecue; Late Lament; Relaxin’ At Camarillo; One Morning In May; I Love You; Lady Bird; Like Sonny; The Hymn; Moonstones. (56:03)
Personnel: Alan Broadbent, piano; Harvie S, bass; Billy Mintz, drums.