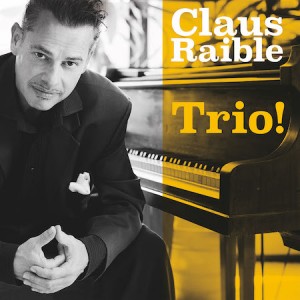 Pianist Claus Raible’s stylistic resemblance to Thelonious Monk is not incidental. So say the three Monk tunes and one standard associated with him that Raible brandishes on Trio! But if Raible loves to wave the flag of half-step harmonies and descending glisses (with which he brackets “Smoke Gets In Your Eyes,” as if we didn’t get the connection already), he also has his own bag of tricks close at hand, saving the album from being an over-eager pastiche.

For one thing, there’s an ease to Raible’s swing on tunes like his original “The Penguin” that a few clattering Monkisms simply can’t obscure. He also has an understated gift for atmosphere: He brings a kind of enigmatic darkness to his version of “On Green Dolphin Street” that involves careful deployment of his left hand and brushwork from Alvin Queen that’s somehow both pointed and sensitive. By the time listeners get to the soulful pocket of Raible’s “Boogaloo—Baloo,” there’s no question that he’s his own pianist—despite the bandleader again nodding to Monk via a familiarly halting pace on his solo. Even so, his creative spectrum seems oddly narrow when playing his own tunes: “Course De Ville” uses a “Star Eyes” paraphrase for its intro, and then is followed by a melody that barely tries to disguise a relation to Bud Powell’s “Wail.”

Trio feels like an artistic tug-of-war: Raible is original enough not to be crushed by the weight of jazz history, but its gravity still has a vaguely unhealthy hold on him.