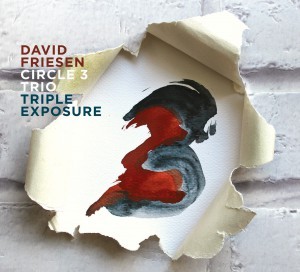 The stamp of protean bassist David Friesen is all over this resonant album, which ends too soon despite a length of nearly an hour. From the striking cover art to Friesen’s 11 originals, Triple Exposure exemplifies individuality. At the same time, it’s profoundly collaborative, a celebration of interplay rather than ego.

On tunes such as the rolling “Rainbow Song” and the wistful “Another Time, Another Place,” Friesen, pianist Greg Goebel and drummer Charlie Doggett never intrude on each other, let alone the listener. Their weave draws the listener in to a unique collective consciousness.

The soundscape is as equitable as the music on an album bracketed by “Whetstone,” a sparkling track propelled by the bright churn of Doggett’s drums, and “Open Country,” a medium-tempo showcase for Goebel’s darkling pianistics and Friesen’s carefully chosen notes.

Based in Portland, Oregon, the Circle 3 Trio speaks of deep respect, a joyous and thorough work ethic and a geniality that brings sunlight to even the grayer, more deliberate tracks like “Side Step” and “Right From Wrong,” a tune that begins in a brooding fashion, then brightens and accelerates.

A similar kind of tension characterizes “Let It Be Known,” an elegantly martial, ultimately bristling tune paced by Friesen’s Hemage bass, a custom Austrian instrument that gives this group extra, unusually plummy, pop. While Friesen rarely solos, his distinctive sound is a constant.

Ultimately, Triple Exposure is a successfully intended pun. As the members of this trio circle each other, they make the listener part of their musical family.