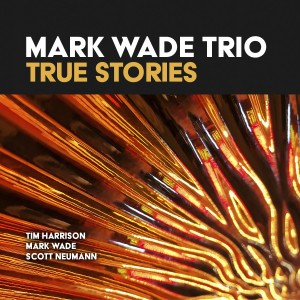 Mark Wade has advanced the art of jazz composition by drawing source material directly from the Western canon and spinning it into fodder for the bassist’s progressive-leaning trio with pianist Tim Harrison and drummer Scott Neumann. The highly original music heard on their latest group effort, True Stories, incorporates themes from Miles Davis, Charles Mingus, Igor Stravinsky and other jazz and classical maestros whose writing has inspired and influenced Wade, an orchestral-level, genre-crossing instrumentalist who has assumed a leadership role in promoting the work of emerging jazz and classical composers via his 8-year-old concert-presenting organization New Music Horizons, and whose tension-free proficiency on electric and upright basses alone has earned the admiration of audiences extending well beyond his home base of New York. The landmark 1960s Davis quintet album Miles Smiles, the first jazz record Wade ever purchased, served as inspiration for the inventive spirit at play on the hard-hitting, ostinato-driven leadoff track, “I Feel More Like I Do Now.” “Falling Delores,” an epitome of elegance, connects two Wayne Shorter tunes (“Fall” and “Delores”) to an original theme by Wade. “The Soldier And The Fiddle,” inspired by Stravinsky’s The Soldier’s Tale, is a Wade original that borrows the iconic Russian composer’s signature technique of juxtaposing a steady underlying pulse against perpetually shifting meters. Weather Report enters the story on “In The Market,” a stylistic merger of exciting turns and twists that finds the trio splicing scenes from the seminal fusion group’s landmark 1976 album Black Market. The altered blues “Piscataway Went That-A-Way” brings Fred Hersch’s angular swinger “Swamp Thing” back to life, while “A Simple Song” bears personal touches of the late pianist and composer Frank Kimbrough (who was Wade’s teacher at NYU). The two-parter “Song With Orange & Other Things” combines a Wade original designed to sound like something Mingus would have written with an actual Mingus composition (the 1960 big band noir-bopper “Song With Orange”). “At The Sunside,” the last of this album’s true stories, borrows its first few notes from “Solokvist,” an upbeat instrumental rocker penned by Swedish soprano saxophonist Mikael Godee for the Scandinavian group CORPO, which included Wade on its 2018 European tour. In essence, Wade turned directly to his roots in order to find a new way forward with True Stories, interweaving his heroes’ eminently familiar melodic threads and textures with his own personal statements — and incorporating it all into a larger, living work of modern art.