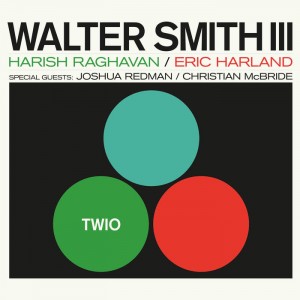 Twio presents the terrific tenor saxophonist Walter Smith III in a tight, tight, tight trio setting. His tone and melodicism are just killing with a flow of ideas that’s vast and beautiful. Smith has been an outstanding player for a long time on his own leader projects and as an accompanist for everyone from Roy Haynes and Terence Blanchard to Sean Jones and Ambrose Akinmusire. But here on Twio, you can tell he’s been peeling back the layers of his art form to focus on the essence. The program is a set of nine standards, or takeoffs on standards, and Smith felt that this material allowed him to just go in, play and enjoy the camaraderie of the musicians around him. At the end of the Monk classic “Ask Me Now,” drummer Eric Harland and bassist Harish Raghavan drop out after swinging beautifully, leaving Smith to whoop, wail and riff for a full two minutes of saxophone colossusism. (OK, that is a made-up word, but that’s the level of respect Smith commands.) He floats across the perfect swing laid down with grace by Harland and guest bassist Christian McBride on “I’ll Be Seeing You.” Tenor saxophonist Joshua Redman also guests on this set, dueling with Smith on “Contrafact” (based on “Like Someone In Love”) and “On The Trail,” a loping jam on the Ferde Grofé standard. All three takes are spot-on fantastic. And so is the entire album, which also features “We’ll Be Together Again,” “The Peacocks” and “Nobody Else But Me.”

Smith allowed himself to have some fun, both when recording and marketing this album. On his website, you can check out cuts from the album, along with some cool video of the recording sessions. Another highlight is a humorous clip devoted to the album’s name. Smith gets dozens of musicians—from John Clayton to Steve Lehman to Linda May Han Oh—to say the word “Twio.” Theo Bleckmann and Thomas Pridgen offer several ridiculously funny takes on how to pronounce it.