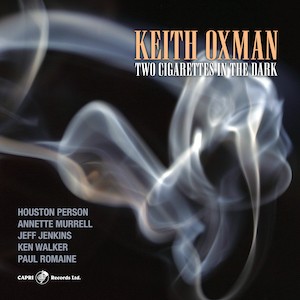 Tenorist Keith Oxman is well known in Denver jazz circles, and has made a handful of albums for the Capri label with groups ranging in size from trio to septet. These all feature local musicians, but once in a while a special guest stops by.

On 2006’s Dues In Progress, trombone legend Curtis Fuller was Oxman’s front-line partner, and on 2018’s Glimpses, reedist Dave Liebman showed up. For Two Cigarettes In The Dark, he’s joined by soul-jazz titan Houston Person on tenor. The pair essay versions of standards like “I’ve Never Been In Love Before,” “Everything Happens To Me” and the title track, as well as a few lesser-known but excellent tunes. On three originals by the bandleader and one by pianist Jeff Jenkins, Oxman is the sole horn, and those have a classicist feel that will appeal to fans of Prestige-era Coltrane or mid-’60s Hank Mobley.

The contrast between the two tenor players’ styles is stark, but complementary: Oxman is a tough-toned bopper who pushes hard, whereas Person relaxes into the groove, aiming for seduction rather than bluster. They’re clearly having a blast, too. At the end of a take of Mobley’s “Bossa For Baby,” Person says, “Yeah—that’s raggedy enough to be good!” Vocalist Annette Murrell also makes two appearences, singing “Everything Happens To Me” and “Crazy He Calls Me”; her voice is low and almost conversational, like she’s singing directly into your ear.

The album is an excellent reminder that quality jazz is being made all over the place, not just on the coasts and in Chicago.