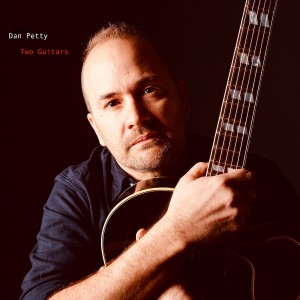 Simply titled Two Guitars, it’s easy to assume there isn’t much to discuss in the way of sonic surprise on the new solo album from composer and producer Dan Petty. Yet, Petty not only shows ample versatility in regard to his own musicianship but also that of the album’s featured instrument: a Selmer-style Manouche guitar.

All but two of the album’s 11 tracks — Al Dubin and Jimmy McHugh’s “South American Way,” which features vocal trio The Goods, and Mike Stern’s “Chromazone,” which brings in Tim Lefevre on bass — are built on two guitar parts. Petty lays down one track each for rhythm and melody. Still, the album shouldn’t be discounted for a lack of innate challenge. Given the traditionalist nature of playing manouche guitars, the music required that more attention — specifically, physical intensity — be applied to the instrument than with a typical acoustic guitar in order to optimize its sound. Petty made a smart shift to his arrangement of “Chromazone” also in pursuit of this objective, layering the melody across two upper octaves in order to give the part a dynamically bolder presence.

The diametrically opposite panning throughout the album — rhythm on the left, melody on the right — unifies. The rounded and rich tonality of Petty’s guitar can sing without constriction through such wide spacing. This embrace of the guitar’s signature tone gives Two Guitars pleasant, musically approachable cohesion without diluting its otherwise diverse repertoire.