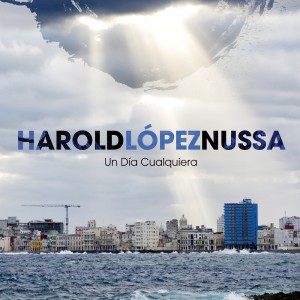 Fans of Cuban pianist Harold López-Nussa’s 2016 disc, El Viaje (Mack Avenue), certainly should check out his new album on the same label: Un Día Cualquiera. The title of the previous disc translates to “The Journey,” and on this new outing, his artistic evolution continues—but in a trio setting. He recorded the album at Boston’s WGBH Studios with his younger brother Ruy Adrián López-Nussa (drums, percussion) and Gaston Joya (bass). The album’s title translates to “Just Another Day,” and in press materials, Harold explains the title’s significance: “The idea is to put the music and the trio together in a studio and just play, the way we three do every day, any day—like a concert in the living room of your house.” And what a memorable concert it is. The stripped-down setting showcases Harold’s dynamic pianism and mastery of tempo, whether he’s delivering a dazzling, lightning-fast flourish or spotlighting his elegant touch with a ballad.

All three band members obviously relish the opportunity to interpret two songs by the great Cuban composer Ernesto Lecuona (1895–1963): “Danza De Los Ñáñigos” and “Y La Negra Bailaba,” which Harold has described as being a piece that’s “somewhere between Cuban son and danzón styles.” Elsewhere, Harold pays tribute to another Cuban icon with the original tune “Una Tarde Cualquiera En Paris (To Bebo Valdés),” which begins in a meditative mode but shimmies, shifts and builds to a fiery dance tempo that the late Valdés surely would appreciate. Potent bass and drum solos enhance this track in a way that the master pianist also would have approved. On the original tune “Preludio (To José Juan),” the combination of Harold’s light touch, his brother’s agile transition from brushes to sticks and Joya’s poignant arco work results in a radiant performance that bears revisiting.

Indeed, many of these tracks feel like short films that one yearns to study repeatedly in order to absorb all their nuances. With Un Día Cualquiera, a superb trio honors the tradition of Cuban jazz, while pushing the music forward via terrific chops and impressive individualism.