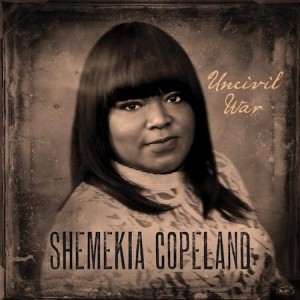 Anyone who has paid attention to the blues scene of the past 20 years is fully aware that singer Shemekia Copeland can belt with gusto. Known more for her vocal gifts than her compositional skills, the key element that distinguishes Copeland’s good albums from her great ones is the quality of the songs she chooses. Her artistry has reached a new level with Uncivil War, thanks to Will Kimbrough, who produced the album, plays electric guitar throughout the program, and co-wrote seven of the 12 tracks.

The album opens with four remarkable, substantive Kimbrough tunes, making it clear that Copeland is not content to merely sing blues fodder about love gone wrong: “Clotilda’s On Fire” chronicles the horrors—and lasting impact—of slavery; “Walk Until I Ride” is a contemporary civil rights manifesto fueled by messages reminiscent of songs by the Staples Singers; the title track is a plea for unity during our divisive times; and “Money Makes You Ugly” is a protest song for environmentalists.

Toward the end of the album, there is a cluster of three songs that are just as weighty as those that open the disc: “Apple Pie And A .45” decries rampant gun violence; “Give God The Blues” is an existential exploration of similarities shared by several organized religions; and “She Don’t Wear Pink” is an LGBTQ anthem.

Not every track on the album is a slice of social commentary; “Dirty Saint” adds a jolt of New Orleans funk to the proceedings. Penned by Kimbrough and John Hahn, the song is a fitting tribute to Dr. John, who produced Copeland’s 2002 disc, Talking To Strangers. The program closes with another type of tribute, as the singer acknowledges her familial and artistic roots by interpreting “Love Song.” It’s a sturdy composition by her father, Johnny Copeland, who was inducted into the Blues Hall of Fame in 2017, two decades after his death. Just as Johnny did, Shemekia Copeland’s work has expanded the audience for the blues.