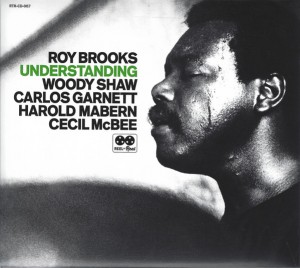 Did you hear the George Coleman disc that dropped last December? A feisty 1971 live hit from Charm City that found the saxophonist’s band truly peaking. Baltimore’s Left Bank Jazz Society presented the show, and Reel To Real put it out — as did both concerns with this new Roy Brooks document, a pick-up quintet date from the fall of ’70. This one isn’t merely feisty, though. This one’s pure fire. Let me repeat that in case you don’t read this review any further: pure futhermuckin’ fire.

Incendiary acts are some of mainstream swing’s most engaging gambits — that feeling when a highflying groove levels up to explode a rhythm section’s propulsion, or a solo is so burning that it compels the entire band to double down in the vehemence department. Understanding resides in these fevered zones. As the six extended tracks flaunt their ardor, it becomes obvious that Brooks’ outfit — trumpeter Woody Shaw, saxophonist Carlos Garnett, pianist Harold Mabern and bassist Cecil McBee — is so united, its mind-meld won’t warp regardless of how rambunctious the attack becomes. Unity bolsters frenzy at every turn.

A 25-year-old Shaw comes on like a mix of Clifford Brown and Albert Ayler. Garnett’s admiration for Trane is obvious but irrelevant — he personalizes every one of his whirlwind declarations. Five bucks says that Mabern has never been captured being this physical on his instrument. And the boss is a powerhouse, giving contemporaries such as Tony Williams a run for their money. This evening of music is a mad dash towards hard-swinging delirium, truly one of those “wish I’d been there” dates. What’s in the Baltimore water?