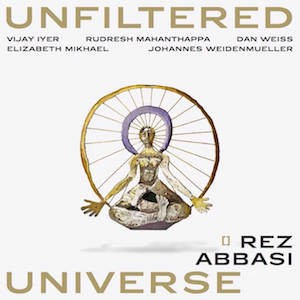 Guitarist-composer Rez Abbasi takes a subtle approach to melding South Asian music and modern jazz on his 12th album as a leader, the third installment in a trilogy of recordings with his supergroup Invocations. A quintet featuring Abbasi with saxophonist Rudresh Mahanthappa, pianist Vijay Iyer, bassist Johannes Weidenmueller and drummer Dan Weiss, Invocations debuted with the 2009 album Things To Come (Sunnyside), which highlighted North Indian Hindustani music, and followed that up with 2011’s Suno Suno (Enja), an exploration of the Qawwali music of Abbasi’s native Pakistan. Now, with Unfiltered Universe, the band takes the Carnatic music of South India as its point of departure. Although each member of Invocations has studied South Asian musical traditions in depth (sometimes in collaboration with each other), they operate on a level that’s more intuitive than preconceived. Rather than being obvious and explicit, the South Asian elements of Unfiltered Universe are woven into in the music’s underlying rhythms, melodic structures and phraseology. Indeed, a collective grasp of South Asian traditions informs the stimulating ensemble communication and propulsive grooves on display here. Highlights include the angular opener “Propensity”; the sometimes pensive, sometimes wild title track; and the cerebral-meets-whimsical “Thin-King.” Abbasi’s stated goal in composing the music for this album was “to let the influences hit the empty canvas and allow that to speak to me” without first imposing any foundational ideas on what he planned to create. The result is something that Abbasi describes as “unprocessed and unfiltered,” revealing the universe of music and experience that exists within him—hence, the album’s apt title and fresh, bold sound.