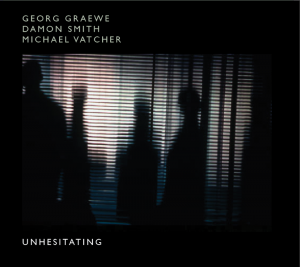 When a session features Georg Graewe at the piano bench, certain words must be banished from one’s vocabulary. He doesn’t show up to pay homage or imitate anyone; he comes to play what the moment requires.

Active since the ’70s, Graewe has worked with free improvisers like John Butcher and Isabelle Duthoit, but also has composed and staged operas. Don’t ask him about the similarities and differences between improvisation and composition, they’re both just tools to making erudite music at the moment that music needs to be made. Bassist Damon Smith and drummer Michael Vatcher are apposite partners for this task.

“Prelude,” a Graewe original, starts out using short phrases and strategic gaps that establish this as music that asks and answers questions. Vatcher and Smith seem to be asking questions of their own, proposing changes of tempo and direction; no one here is hesitating. They treat “Ictus” like an ongoing negotiation of hierarchy, but not for the mere sake of control. Rather, the players seem to be sorting out how to honor both Carla and Paul Bley by using their tune as a vehicle for finding a lucid trio dynamic.