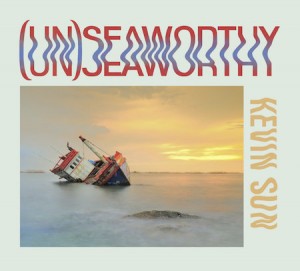 A listing ship is pictured on the cover of Kevin Sun’s (Un)seaworthy, but it’s not reflective of a music that, for the most part, is on an even keel. Whether modifying a melody, as they do on “Bad Lady” or “Facsimilate (Unlike You),” Sun’s trio is locked in a highly creative, imaginative mode. The bandleader’s explosive saxophone, à la Anthony Braxton, is tonally and rhythmically in sync with bassist Walter Stinson and drummer Matt Honor, as he alternates breathless runs and intervallic leaps to their constant beat.

Immediately, it is clear that bandmembers have an intuitive feel for each other, and Sun knows exactly how to keep them alert and focused without stripping out their singular inventiveness. On “Prelude/Genuflecting At The Cathedral Of The Perpetual Hustle,” the ensemble’s full expressive force erupts, and Sun weaves with precision between the snap and pop of Honor’s drums, and Stinson’s sonorous bass. There are separate and distinctive moments when the rhythm team converses, especially on “Latinate,” demonstrating lavish musical continuity. A heap of history is evoked across the album, too, though Sun is the sole composer and chief innovator with his Coltrane-like sprints up and down scales, and his nod to the past with suggestions of Coleman Hawkins and Lester Young. Evidence of this prevails on “Facsimilate (Unlike You),” where Sun offers a charming intimation of “Jitterbug Waltz” at the song’s close.

Overall, (Un)seaworthy is both a glance back and a look forward, indicating the vast promise of Sun and his trio’s potent understanding of jazz forebears. Theirs is a fervent, collective creativity—and it’s only a beat or two from total fulfillment.