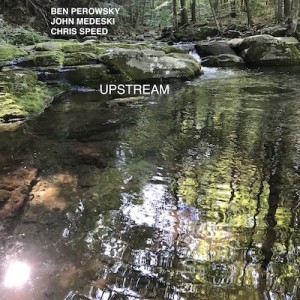 To most jazz listeners, the combination of B-3, tenor saxophone and drums spells “organ trio,” and reasonably so. Even when they’re sidemen, organists tend to dominate the sound of a small ensemble, the familiar purr-and-growl of the keyboard inevitably leading to an amicable vocabulary of blues licks and soul grooves.

And to be honest, there’s a fair amount of that on Upstream, even if organist John Medeski tastefully avoids the most obvious and timeworn tropes of organ jazz. Still, this isn’t an organ trio album in the end, because even at its most Leslied, Medeski’s sound invariably yields to the undeniable groove and articulation of drummer Ben Perowsky, whose playing ultimately defines Upstream.

With a resumé that runs the gamut from Mike Stern to Masada, and Rickie Lee Jones to Joan As Policewoman, Perowsky is clearly a versatile stickman. But what drives Upstream has less to do with his technical command than with his conceptual commitment. Whether through the itchy, edgy fatback behind the bruising blues of “Kanape” or the dreamy, suggestive pulse of “Meta,” Perowsky’s drumming both drives and directs the music, using his accents and spaces to coax the best out of his bandmates.

The sly, New Orleans-schooled groove of “Sidecar” boasts some awesomely funky interplay with Medeski on the intro. The tune’s true genius, though, is revealed as those intricate rhythms fold into the boppish phrasing of the head once Chris Speed’s tenor enters. As solid as the interplay between Perowsky and Medeski is, things go up a notch once the drummer starts reacting to the almost deferential grace of Speed’s laid-back tone and phrasing.

On the other end of the spectrum, there’s “Worms,” a cartoonishly brisk number in which Speed’s clarinet and Medeski’s organ are first hurried along by Perowsky’s brushwork, then coaxed into classic swing when he switches to sticks, the pocket impeccable no matter how much the tempo varies. Taken together, these delightfully varied performances upend the expectations of organ jazz, even as they leave the listener hungry for more.