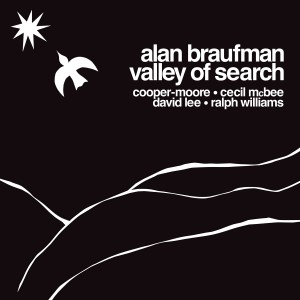 Valley Of Search might have been the first and last recording of its kind. The 1975 album was perhaps the final moment of reconciliation between the rapidly diverging sides of John Coltrane’s musical legacy—a unity of the modal, Eastern-influenced spiritual jazz with the intense free-form—that never again would occupy the same strain of music. But it also was among the early signals of the nascent Manhattan loft scene, being recorded in the Canal Street storefront where multi-reedist Alan Braufman and pianist Gene Ashton (b.k.a. Cooper-Moore) lived.

Valley Of Search is the only album made under Braufman’s leadership, and ranks as Ashton’s first recording—nearly forgotten, but now ripe for rediscovery.

The modalism and spiritualism of the album are obvious from the instant the music begins. Ashton’s dulcimer establishes an unaccompanied ostinato drone on “Rainbow Warriors” and quickly is joined by bassist Cecil McBee playing arco figures drawn from the Indian violin tradition, and solemn percussion from David Lee and Ralph Williams. Their mesmerizing playing segues into “Chant,” on which Braufman joins them on flute and Ashton switches to piano, and recites a Baha’i prayer. Although Ashton’s delivery alternates between resembling a Zen koan and a gospel preacher, the feel is of a meditation.

Throughout the album, Lee subtly is gaining steam on the trap kit, while Williams’ percussive textures—rattles, bells—slowly gather into an avalanche. Just after the halfway point of the eight-minute “Chant,” Braufman veers hard into sheets-of-sound territory, emitting long shrieks that Lee and Williams follow, while McBee and Ashton hang suspended between freedom and their previously formulated structure.

It’s that unique blend of metamorphosis and tension that makes Valley Of Search move—especially the work on Ashton and McBee’s end. Braufman’s pull-along of Lee and Williams becomes a recurring pattern, which led to the percussionists actively working against the bass and piano’s pulses; they fight back with relish. As Braufman yelps on “Love Is For Real,” Ashton modifies, but doesn’t abandon, his riffs, even turning the transformed version into a solo, when the saxophone dies down. As for McBee, who gets his own bass showpiece on “Miracles,” his lines don’t spontaneously change shape so much as they develop motivically. The effect is nearly subliminal: On “Little Nabil’s March,” his four-to-the-bar reduces itself to a forebeat, then adds a syncopated accent and gradually returns to hitting every bit, now with the syncopation in tow.

Originally the second release on the India Navigation label, Valley Of Search was extraordinary work, but too underground to get the attention and ears it deserved. It’s not too late: More than 40 years later, it’s still chance-taking, jaw-dropping music.