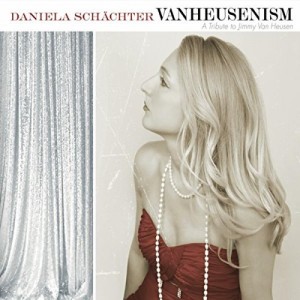 Daniela Schächter has both the maturity of vocal style, and the awareness of a seasoned musician to be able to make this album, which is less of an adoration project and more of a genuine addition to her solo album collection.

This set of songs is taken from The Great American Songbook—there are Bing Crosby and Frank Sinatra standards here—so purists and casual fans alike will find much to please them on this album. It is arranged and performed with precisely the correct mix of homage and invention.

Schächter allows the frame of each song to establish itself, but she is not afraid to embellish it with her own touches. She also allows some tempo changes—the almost sacred “Come Fly With Me” enjoys a bossa nova twist. The classic “All The Way” demonstrates Schächter’s arrangement and playing skills most ably, once again walking that delicate balance between respect for the original and the personal artistic enhancement.

The title track, an affectionate tribute to the title’s namesake, demonstrates why this album works so well. Schächter has absorbed enough of the Van Huesen style to be able to mimic it perfectly, embellished by a delicate and restrained saxophone solo from Mike Tucker that rolls into some sublime phrasing.

The final track, “I Thought About You,” neatly ties up the appeal of the preceding set—the inspiring piano solo, the cool classy vocals, the skilful arrangements. It sounds tricky to execute, but realized with ambition and skill. A worthy tribute for one great artist—from another.

Vanheusenism: A Tribute to Jimmy Van Heusen: Here’s That Rainy Day; Darn That Dream; Come Fly With Me; Like Someone In Love/Imagination; The Second Time Around; Vanheusenism; All The Way; Polkadots & Moonbeams; It Could Happen To You; Call Me Irresponsible; But Beautiful; I Thought About You. (76:38)
Personnel: Daniela Schäcter, piano, vocals; Mike Tucker, tenor saxophone; Michael O’Brien, acoustic bass; Mark Walker, drums.