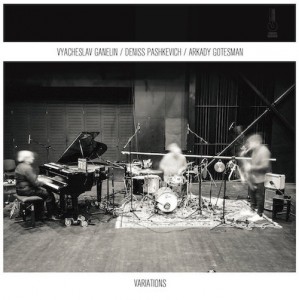 Why does this album work? Vyacheslav Ganelin, Deniss Pashkevich and Arkady Gotesman aren’t at all afraid of getting weird. In the world of avant-garde jazz, the vibe here isn’t all that uncommon. But there’s something about the way Pashkevich’s tenor saxophone knows the right way to float in the middle of this environment—like a plane gliding through turbulence.

On each of the four tunes named “Variation,” magic happens. And what might seem like free-jazz really is more of an exploration of shapes and colors, all of them dark, but still evenly balanced. Chaos seems to easily take form on this live date, captured during September 2018 at the Latvian Academy of Culture: The quiet build of “Variation 3” feels like visiting the eye of a storm, just before another wind hits, as Ganelin chooses to deploy his synths as tinny, electronic accents to Pashkevich’s saxophone. Ganelin, Pashkevich and Gotesman’s pushing at the edges on each of these variations just feels a lot like a brilliantly cheesy ’80s score, something that evokes horror films or a documentary about the anarchic formation of the universe.