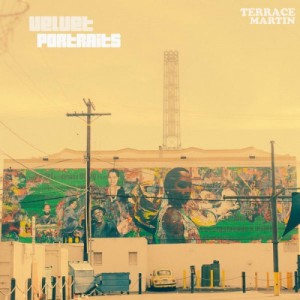 In recent years, Terrace Martin has been known as the producer for flourishing hip-hop artists like Kendrick Lamar and YG, but with his most recent release, Velvet Portraits, the saxophonist focuses on the classic sounds of jazz, funk and soul.

The album is Martin’s third leader project, and his most ambitious statement yet. Over the course of 14 tracks, Martin balances instrumental soul-jazz with vocal tunes, showcasing a number of his friends along the way. After the album gets kicking with the sax-and-synth-heavy “Valdez Off Crenshaw,” the funky sounds of “Push,” featuring vocals from Nashville-based artist Tone Trezure, brings things back to earth and sets the pace for the remainder of the album.

“Curly Martin,” named after Martin’s father, who plays drums throughout the record, invites keyboardist Robert Glasper, bassist Thundercat and drummer Ronald Bruner Jr. for one of the album’s most epic jam sessions. It’s followed by the unruffled “Never Enough,” a track that explores the current landscape of r&b with vocalist Tiffany Gouché.

While the appearance of Kendrick would make for easy pop appeal, it’s a virtuous decision for Martin to rely instead on friends in the jazz world and lesser-known vocalists. In fact, there isn’t a single rap verse on the entire record, although some instrumental hip-hop does find its way in.

“Turkey Taco” finds a hard-hitting G-funk groove that would have both Dr. Dre and George Clinton bobbing their heads. “Tribe Called West,” which features Miles Ahead-affiliated trumpeter Keyon Harrold, is a number that tips its hat to A Tribe Called Quest, a group that pioneered the jazz-rap sound of the early ’90s, and one that Martin once said was more important to him than The Beatles.

Before this album, Martin was an accomplished producer in the hip-hop world, but had yet to fully realize his potential as a bandleader and composer. Over the course of the album’s 70 minutes, Terrace flexes his skillset in the genres that birthed hip-hop—jazz, funk and soul—while occasionally reminding the listener that he is indeed one of the leading producers in the rap world. You’ll hear shades of Donald Byrd and Curtis Mayfield, but you’ll also pick up on Dr. Dre and Q-Tip.