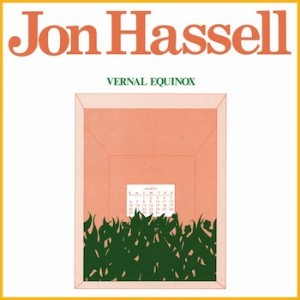 Whatever jazz is, the music sprung from and is able to encompass sundry other musics. And while trumpeter Jon Hassell’s connection to the genre is nominal, his career stretches back to recording In C with minimalist Terry Riley.

Hassell, who’s likely best known as a Brian Eno collaborator from the producer’s early ambient phase, has contributed to works by pop and avant-gardists while also producing his own far-flung material, including a 1994 experiment in jazzy trip-hop. The reissued Vernal Equinox, the trumpeter’s 1977 debut, ranks as one of his most sedate works, but also precedes his better-known Earthquake Island. That latter disc, released the following year, finds its footing with a more new-agey feel and a batch of percussion that might have intrigued Talking Heads fans.

For his debut, Hassell enlisted Brazilian percussionist Naná Vasconcelos to knit in textures as the bandleader’s trumpet drips lines that refuse to intimate a melody, instead coming off like a busted-up shofar. If there’s a cut here that encapsulates Hassell’s work, though, it might be the closer, “Caracas Night September 11, 1975.” The calm calamity of crickets droning on in the evening provides a supple bed for Hassell’s wandering tone, connecting Vernal Equinox to his slow-cooked 2009 ECM effort, Last Night The Moon Came Dropping Its Clothes In The Street.

Correction: Jon Hassell’s surname was spelled incorrectly in a previous version of this post. DownBeat regrets the error.