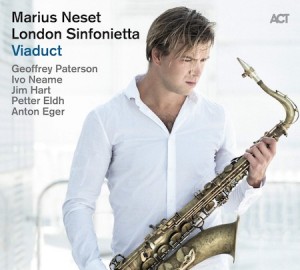 The London Sinfonietta has a long track record of collaborating on jazz-related projects, and they approach Viaduct with a punch and energy still uncommon in “classical” ensembles, even now. At first, this might seem to be an early modernist work with jazz elements, but it came out of a commission from the Kongsberg Jazz Festival, allowing saxophonist Marius Neset to team his regular quintet with this larger force.

The opening movement is a complex overture, sometimes thoughtful, sometimes frantic and sometimes cinematic, punctuated by Stravinskyian stabs of sound, followed by slow reflective phases; it contains much of the musical information that’s played out later, some sections perhaps not quite distinct enough to stand alone, but connected like creaky architectural arches. Pianist Ivo Neame and vibraphonist Jim Hart interpose contrasting lines, and it’s to the eternal credit of the rhythm section that it doesn’t get lost in the mix. “Viaduct Part 2a” is a mighty 11 minutes and a compelling exercise in control. The orchestra’s on its toes and ready for anything, and there isn’t a moment when the two parts don’t seem to work as one. Such commissions come along infrequently, but on the strength of Viaduct, someone ought to sign Neset up quickly.