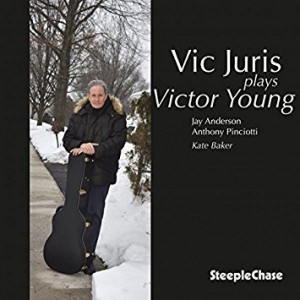 Chicago-born, European conservatory-educated Victor Young composed dozens of memorable songs for dance bands, studio sessions, radio broadcasts and movie soundtracks from 1930 up to his death in 1956. Guitarist Vic Juris, after a 50-year career from his New Jersey base, has almost two dozen records as a leader to his credit—half of them on SteepleChase, often with bassist Jay Anderson and Anthony Pinciotti—and others with such stalwarts as Phil Woods, Dave Liebman and Richie Cole. Vic Plays Victor Young is a sensitive, melodically exploratory album of standards and rarely covered airs, as should be expected from a seasoned ensemble with a compatible repertoire.

Taking a deceptively understated approach, Juris alone and in collaboration brings out the dreamy melancholy of Young’s themes. His impeccable touch on both electric and acoustic instruments, his luminous tone, gracefully swinging time and elegant phrasing all are admirable, as is the album’s modesty—no extreme grandstanding here, just committed creativity. Anderson’s dark upright sound, featured on “Beautiful Love,” matches Juris’ pearliness, and Pinciotti is particularly adept with his brushes, though he shows tasteful power in his featured intro to “Stella By Starlight,” the most harmonically oblique track. Every piece seems as directly intimate as guest vocalist Kate Baker’s rendition of “My Foolish Heart,” on which she’s backed only by the guitarist.

This is an album for quiet times, when pleasure is on the agenda.