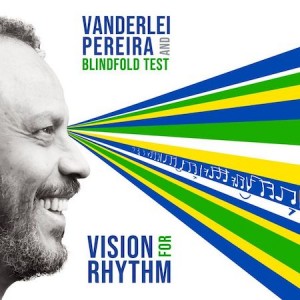 Drummer Vanderlei Pereira’s choice for his band’s name—Blindfold Test—and the title of his leader debut—Vision For Rhythm—both convey the positive attitude of a gifted musician who, as a youngster, lost his sight due to retinitis pigmentosa. In concert, his bandmates occasionally don blindfolds when performing their most intricate numbers, helping to draw a personal connection to the way in which their leader experiences music. But when a band plays this well, no such stunts are necessary to win over new fans.

Fluent in many musical styles associated with his native Brazil, the New York-based Pereira has assembled a 70-minute program that includes four of his original compositions, as well as works by Antonio Adolfo, Edu Lobo and Toninho Ferragutti, among others.

On this album of sextet recordings, the leader has crafted arrangements that give his bandmates plenty of room to shine, as evidenced by Jorge Continentino’s authoritative flute work on “Misturada (Mixing),” a 7/4 samba composed by Airto Moreira, as well as Gustavo Amarante’s compelling electric bass solo on “O Que Ficou (What Remains),” a Pereira original.

The leader’s wife, Susan Pereira, elevates the program with a variety of wordless vocal acrobatics, often adding a percussive element via rapid-fire bursts of coloration. On a rendition of Zeca Freitas’ “Alma Brasileira (Brazilian Soul)” she delivers a dazzling performance, precisely mirroring the shifts in Rodrigo Ursaia’s tenor saxophone lines. The effect is as impressive as it is hypnotic.

The band name Blindfold Test has another connotation, too. DownBeat readers have been enjoying the Blindfold Test—in which a musician is asked to comment on unidentified tracks—since 1951. Now, the challenge arises for a fervent journalist to play a track by Vanderlei Pereira & Blindfold Test during a future DownBeat Blindfold Test. After all, Vision For Rhythm offers a dozen great tracks from which to choose.