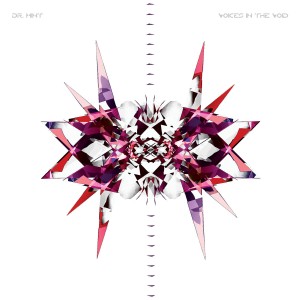 From the futuristic graphics to the expansive download that comes with the vinyl recording, DR. MiNT leaves no forward stone unturned. A collaboration between a Los Angeles-based front line and a shapeshifting, New York-based rhythm section, Voices In The Void is consistently stimulating and ambitious, even when it devolves—rarely—into cacophony.

This iconoclastic group expresses the collective vision of trumpeter Daniel Rosenboom, saxophonist Gavin Templeton, guitarist/effects wizard Alexander Noice, electric bass/effects man Sam Minaie and drummer Caleb Dolister. Together they build “archestrations,” collaborative compositions created on the spot from a template that might be rhythmic or melodic.

DR. MiNT’s fifth album includes “Kingdom In The Middle,” the record’s launch cut, so thick it’s impossible to tell who plays what; “Down To One,” at its core a duel between Templeton and Noice; and “N-Drift,” the longest tune on the album (which, it’s worth mentioning, has been stylishly pressed on red vinyl).

The bonus digital album, Beyond The Void, is much longer and perhaps more ambitious. It starts with the wittily titled “Benny Hill Bath Salts,” then follows with “A Voice In The Noise,” a showcase for the similarly free-spirited Templeton at his most pointed. The download ends with “Everything Is Going To Be Okay (Pt. II),” which covers march, dirge and, in its very satisfying middle, a deep, floating groove showcasing Dolister and Minaie’s simpatico rhythmic flexibility.