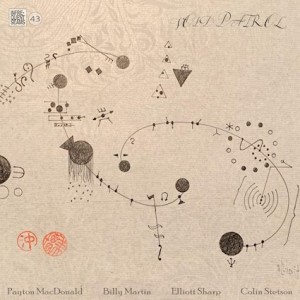 Void Patrol is the new album by percussionist Payton MacDonald, drummer Billy Martin, guitarist Elliott Sharp and baritone saxophonist Colin Stetson. It’s a long-distance project cooked up by MacDonald as a way to make art in any way possible — like most musicians these days. For Void Patrol, MacDonald laid down very basic themes for each of the album’s five tracks, then fleshed them out by handing them over to the other players to embellish upon, one at a time. The results are an exciting mix of thoughtful listening, joyous noise and beat-driven beauty. “Antares” has an infectious groove with Martin heavy on the trap drums, MacDonald driving a repeating, hypnotic pattern on marimba and Sharp soul-surfing across this cloud of percussion with well placed swoops and wails on guitar. Nearly four minutes in, Stetson enters, playing his saxophone through a processor with computer-like sonority. It’s a true buzz of sound, with each musician adding such interesting takes that one might wish to hear each one individually, then as part of the overall mix. The core of every tune is this dedication to maintaining a drone to improvise over, under and through. “These tracks groove hard at times, and by keeping a drone going there is always a sense of grounding and the tonality is clear,” according to MacDonald. “One might label this as jazz, but if we’re going to get fussy about labels I would also include drone and metal.” The improvising on this disc is on red alert, but not in the way one traditionally thinks. Instead of trading fours, eights or whatever, everyone is improvising at once — sometimes talking loud and over each other like a group that can’t wait to finish each other’s sentences, other times dropping to a whisper to really catch an interesting point. It’s cool that Sharp kicks off each of the album’s first four tunes with a dramatic strum of his guitar, like a call to arms. Then on “Acrux,” the album’s final tune, MacDonald picks up on that the theme on marimba, introducing the recording’s dreamiest of sound clouds. Stetson joins with saxophone flutters while Martin and Sharp bubble underneath, aerating the sonic brew and building toward a tidal pool of instruments and sounds that float in and out with the breeze. It’s a great conclusion to a project where one gets the sense that these four artists had a blast entertaining each other, and now the rest of us get to enjoy their conversation. To get the inside scoop on Void Patrol, check out the September 2022 issue of DownBeat. You can order one HERE, starting on Aug. 6.