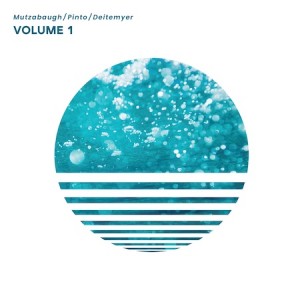 The instrumental trio of Paul Mutzabaugh, Mike Pinto and Jon Deitemyer has been active on Chicago’s creative music scene for nearly eight years, drawing on elements of jazz, folk, commercial pop, funk and TV drama theme songs as fodder for its live shows. Volume 1, the group’s first official album, captures these longtime collaborators in the studio, sounding virtually unfettered on a program of originals by all three band members plus a couple of curious covers — just like they would on stage. With multi-instrumentalist Mutzabaugh on electric bass, Pinto on electric guitar and Deitemyer on traditional drum set, the music develops organically over the course of each track, where catchy melodic and rhythmic statements evolve into full-blown jams rife with improvised solos and instantaneous arrangements, the dynamic ensemble interplay ranging from soft-touch pianissimo to hard-hitting fortissimo. Though a trio of equals by its very nature, the group has a dominant voice in Pinto’s bespoke guitar sound: a distinct blend of shimmery old-school tremolo, compressed sustain, ample reverb/echo, satisfying morsels of overdriven midrange crunch and a signature strum that lends a tasteful dramatic flair. Mutzabaugh, his bass pronounced yet subtle in the mix, frequently shares melodic duties with Pinto, leaping into delightful upper-register runs before settling back into low-end groove mode. Mutzabaugh has unique voice on the instrument, one that defies easy description; suffice it to say that he has impeccable timing, ample technique, an ultra-smooth touch and a producer’s ear for equalization. Deitemyer, known around town for his refined talent and situation-appropriate instincts, demonstrates tremendous influence over the direction and mood of each track. The drummer’s every move — from swirling brushwork to pronounced crashes and light-touch snare grooves emanating from deep within “the zone” — is informed by his and his trio mates’ anything-goes attitudes and their highly elastic, adventurous repertoire. (In addition to the seven originals presented here, the program includes a tune by the 1970s folk rock band Bread, as well as more recent music from the Denmark-produced political TV drama Borgen). Volume 1 embraces elements from a wide range of styles and song forms both vintage and modern. With its fresh vibe and open invitation to uncorrupted improvisation, this uplifting debut documents one of the more noteworthy acts contributing to Chicago’s vibrant community of boundary-pushing music creators.