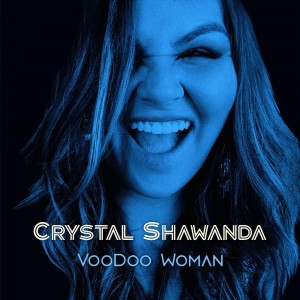 On the blues album VooDoo Woman, the band is a powder keg, the singer is a blowtorch, and the artistry is positively explosive.

Canadian vocalist Crystal Shawanda opens this program of mostly blues classics with a medley of “Wang Dang Doodle/Smokestack Lightnin’,” wailing with intensity while her husband and lead guitarist, Dewayne Strobel, delivers fiery licks. Shawanda—who was born on the Wikwemikong First Nation reserve in northern Ontario—rose to fame as a country singer and 10 years ago was the subject of a CMT documentary series, Crystal: Living The Dream. Her 2014 album, The Whole World’s Got The Blues, signaled that she was poised to explore another genre, and her new disc, VooDoo Woman, makes it clear that she’s a bona fide blues belter, as evidenced by scorching renditions of “Ball And Chain,” “Hound Dog” and the title track, penned by Koko Taylor. A smoldering version of the Etta James classic “I’d Rather Go Blind” highlights Shawanda’s power as a balladeer and her reverence for standards. Shawanda and Strobel enliven the program with new arrangements of originals she had recorded before, including the barn-burner “Trouble” and a medium-tempo tune, “Cry Out For More,” that showcases Stephen Hanner’s fine harmonica work.

“Singing the blues is like letting a bird out of a cage,” Shawanda said in a press release. “This feels like what I’m supposed to be doing.” It sure sounds like it. (Shawanda, who is based in Nashville, will perform at that city’s Bourbon Street Blues and Boogie Bar on Nov. 30.)