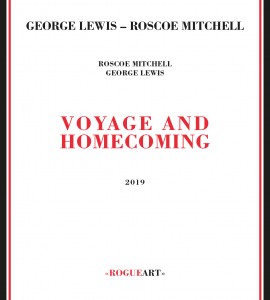 This meeting between two pillars of AACM is an uneven affair, which can be explained by the diffuse nature of each of the three pieces here.

“Quanta” mainly pits Roscoe Mitchell’s sopranino saxophone against the sounds produced by George Lewis through a laptop. The saxophonist’s reedy squeaks are alternately tentative and plaintive, while Lewis delivers fairly conventional fare. As the latter’s output grows increasingly foreboding, the two begin to sound at odds. As if sensing the mismatch, Mitchell becomes more animated, encouraging his longtime collaborator to join in the maelstrom.

Much more fascinating is “Voyager,” when an interactive computer program created by Lewis activates an acoustic piano. After a piano solo rooted in classical vernacular, Lewis engages the instrument with thoughtful and well-paced trombone phrases. Mitchell takes his own turn, this time on the alto, relishing the opportunity to challenge and probe the program. The piece concludes with a trio segment that adds a new ingredient, humor, handled in successful fashion by the interactive computer-pianist. What impresses most is that, without a prior knowledge of the process at play, it would be impossible for a listener to consider that the piano might not be played by a human. Computers, though, are set aside for the closer, “Homecoming.” Lewis’ initial zestful ruminations end with a sustained growl that invites Mitchell (on soprano) to enter a dialog. Their exchanges, subtle at first, slowly gain in spirit—always engrossing.