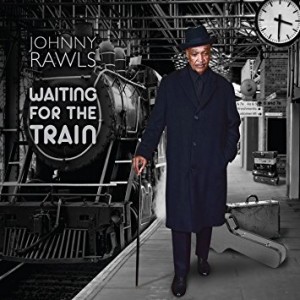 Blues/soul singer Johnny Rawls addresses both spiritual and carnal topics on his new album, Waiting For The Train. With a voice that mixes silk with grit, Rawls delivers a gospel message on “Las Vegas,” singing, “Do you believe in God/ Do you believe in Jesus/ Do you believe He’s there/ Do you believe He sees us?” Bob Trenchard—the bassist in Rawls’ band, The Rays—co-wrote six of the 10 tracks here, including the funk-flavored “California Shake,” a humorous, risqué tune in which the protagonist is disturbed by his loud neighbors: “The wall was bangin’/ The bed was creakin’/ Easy to tell that they sure wasn’t sleepin’.” Producer Jim Gaines makes judicious, graceful use of a muscular horn section on this disc. Punchy horns spice up “Rain Keep Falling (’Til I’m Free)” and “Turning Point,” thanks to Mike Middleton (trumpet), Joel Chavarria (trombone), Andy Roman (alto and tenor saxophone) and Nick Flood (tenor and baritone sax). Dan Ferguson’s lovely piano work adds heft to Rawls’ poignant reading of Bob Dylan’s “I Shall Be Released.” On the title track, when Rawls tenderly sings that he’s “waiting to cross over the river/ waiting to go, oh, just to be delivered,” it’s clear that the envisioned destination is in the hereafter.