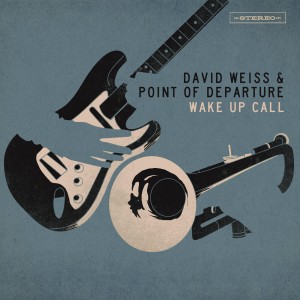 Miles Davis stalks the new album by trumpeter David Weiss & Point of Departure, as a source of pleasures past and inspiration of things to come. Wake Up Call rings with directions in music Davis charted in the late ’60s and early ’70s, starting with “Sanctuary” from Bitches Brew, which Weiss arranges for twined electric guitars to float over oh-so-laid-back bass lines and spacious but increasingly emphatic drumming. As his own dark, penetrating trumpet is offset by Myron Walden’s beseeching, grainy tenor saxophone, Weiss evokes his master while clarifying the original, somewhat murky soundscape and promotes Ben Eunson to the heroic guitar role first filled by John McLaughlin.

Big guitar statements by Eunson, Travis Reuter and Nils Felder are spotlit throughout PoD’s adaptations of compositions by Wayne Shorter, Tony Williams, Joe Henderson, Charles Moore, Kenny Cox and Lelo Nazavio. But Weiss does not spare himself from grappling with the open modal forms that in their day supplanted (if they didn’t eclipse) the hard-bop/post-bop structures characteristic of another of his ensembles, The Cookers. And stretching himself as well as responding to and with his collaborators—including tenor saxophonist JD Allen—Weiss sets a high bar for today’s generation of mainstream modernists.

If Wake Up Call doesn’t posit a brand new future, it reiterates how far jazz has come, and moves confidently toward the next horizon.