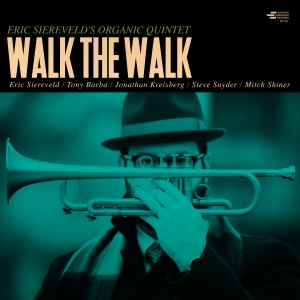 Eric Siereveld updates the soul-jazz of the 1960s and 1970s on Walk The Walk, an eight-tune nod to bop en route to funk. One might compare Siereveld—on trumpet and flugelhorn—and saxophonist Tony Barba to Horace Silver frontmen Blue Mitchell and Junior Cook; they evoke a similarly dramatic flair. But the bandleader’s bite and swagger, along with Barba’s meaty tonality, set apart the debut of Eric Siereveld’s Organic Quintet.

The tunes are memorable and vernacular. The title track is a debonair, medium-tempo blues that Barba sets up for guitarist Jonathan Kreisberg and Hammond B-3 player Steve Snyder. “The Other Side (Of The Hudson)” is a trenchcoat blues spotlighting Snyder. Kreisberg also shines on the jaunty “Toughin’ Up” and the one cover, a satin take on the Rodgers & Hart classic “Bewitched, Bothered And Bewildered.”

But this stylish recording launches with “The Last Innovator,” an homage to Woody Shaw, who Siereveld considers the last trumpet innovator. The closing tune, “Split-Finger,” is a danceable, boogaloo tribute to Blue Note antecedents and the Cincinnati Reds, Siereveld’s hometown baseball team.

The album is well-sequenced, alternating fiery struts, like the driving “Occam’s Razor,” with more relaxed cuts like the Rodgers & Hart cover and “B-Town Bop,” a tribute to the late jazz educator David Baker.

The quicker offerings suggest that this ensemble would be riveting live, as this bass-free group effectively straddles the familiar and the daring.